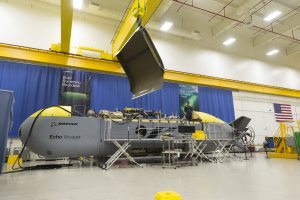 Weapon systems never seize to evolve into smarter, more effective, and more sophisticated marvels of engineering. In the recent years, the focus has shifted on autonomously flying drones and augmented reality suites, but that’s not all of it. The U.S. Navy is reportedly developing a pioneering watercraft that will be able to get submerged, opening up a whole host of new utilization opportunities that make America’s foes nervous. According to revelations made by Captain Pete Small, who also happens to be the Naval Sea Systems Command program manager for unmanned maritime systems, the U.S. Navy is working in collaboration with Boeing on a $43 million program that aims at the development of a highly versatile, weapon-equipped underwater submerging unmanned vehicle (UUV).

This new watercraft will be completely autonomous, will feature high-precision navigation, and will be able to endure damage from other weapon systems as well as the environment of course. The program’s first phase will yield four UUVs of this type, and depending on the first operational results; it will get renewed and extended. From the operational value perspective, the new watercrafts will be able to travel afar, deploy sensors in strategic positions, or even deploy other smaller UUVs that are specialized in surveillance and intelligence data collection. The Navy is expected to treat these new UUVs like small submarines, as they will be deployable from a ship’s well deck or the shore. With a diameter of about 7 feet (about two meters), those watercrafts will undoubtedly be very versatile in all kinds of operations.

Boeing will carry out the hull, propulsion, and instrumentation design, as they know how to make them well-performing while keeping the costs low. They have already materialized quite a few submersible vehicles for the U.S. Navy in the recent past, and the experience that they have gathered from the research and development process is both invaluable and unique at a global scale.