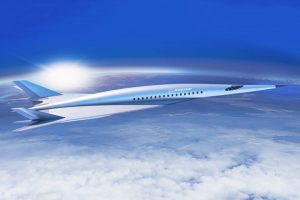 Recently, Boeing unveiled its first concept design for a hypersonic passenger jet. This plane is expected to revolutionize air travel by cutting down a transatlantic flight from New York to London from seven hours to two. The concept was revealed during the American Institute of Aeronautics and Astronautics (AIAA) conference in Atlanta.

But how is the vehicle going to reach these speeds?

A type of engine known as a ramjet, a staple of many hypersonic plane designs, is used in the new Boeing plane. The hypersonic jet’s sharp front-end design would produce minimal drag while its split tail would help to stabilize and steer the vehicle.

The Boeing concept craft will be on display at the forthcoming Farnborough Air Show this month near London.

“We’re excited about the potential of hypersonic technology to connect the world faster than ever before,” Kevin Bowcutt, Boeing’s senior technical fellow and chief scientist of hypersonics, said in a statement. “Boeing is building upon a foundation of six decades of work designing, developing and flying experimental hypersonic vehicles, which makes us the right company to lead the effort in bringing this technology to market in the future.”