Zapata Ezfly: The Aerial Segway Anyone Can Fly 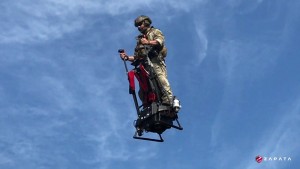 For the past several years, inventors have been coming up with some incredible flying car designs. But the search for a viable flying car — one that doesn’t look too silly — is still on.

Meanwhile, French inventor Franky Zapata has revealed a “Segway of the sky” — the Zapata Ezfly hoverboard. Zapata amazed the world in 2011 with the release of the world’s first water-propelled hoverboard, known as the Flyboard.

The Ezfly is a relatively simple-looking machine: a pair of handgrips projecting up from a small baseboard equipped with a series of jet thrusters. Once airborne, the rider can steer with their body weight — just like on a Segway.

In the above video, shot in Texas last October, 10 pilots can be seen taking turns flying the Ezfly over the surface of a lake. It appears that each rider was able to handle the machine with relative ease.

Notably, a number of participants in the test team were wearing camouflage, which suggests that U.S. defense forces might be interested in this personal flight device.