World’s Largest Plane Will Take Off This Summer 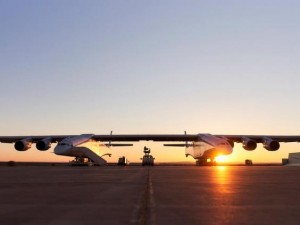 The world’s largest plane, the Stratolaunch, is lumbering toward its first flight. The plane, a 500,000-lb. beast, recently completed a runway test in anticipation of its debut flight, which is planned for some time this summer.

This massive plane is 238 ft. long and 50 ft. tall. It features six high-bypass-ratio turbofan engines used by the Boeing 747 and can carry more than 500,000 lbs. of payload.

The Stratolaunch is so big that it requires two cockpits. It has a wingspan longer than a football field at 385 ft.

It has already gone through two ground tests, during which it reached a maximum speed of 46 mph. However, the Stratolaunch has to reach taxi speeds up to 138 mph to take to the skies.

The enormous Stratolaunch aircraft was created by Microsoft co-founder Paul Allen. Allen plans to make this plane a platform for lifting rockets into the stratosphere before launching them into space. As most space flights and many kinds of satellite are in low-Earth orbit (LEO), it will prove to be a cheaper and more reliable route to LEO.