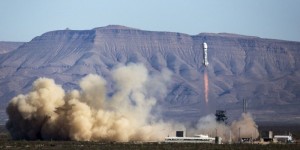 This past weekend, on April 2nd, Blue Origin successfully launched and landed its New Shepard rocket for the third time.

Incredibly, Blue Origin reports the rocket hit an apogee of 339,178 feet or 103 kilometers, with the same hardware from its previous flights.

In addition, Blue Origin says that the company “pushed the envelope on this flight, restarting the engine for the propulsive landing only 3,600 feet above the ground, requiring the BE-3 engine to start fast and ramp to high thrust fast.”