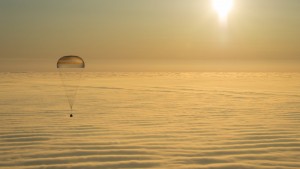 Last night, three astronauts returned to Earth after 172 days in space, including NASA astronaut Jeff Williams, who holds the record for the most days in space with 534 total across four missions.

The other two astronauts who safely landed back home from the International Space Station were Roscomos Alexey Ovchinin and Oleg Skripochka.

NASA Ustream channel has all you need in regards to Tuesday night’s Soyuz spacecraft landing in Kazakhstan, including the de-orbiting burn of the craft.