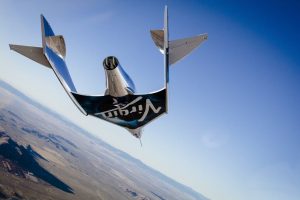 It’s hard to believe that four years have passed since a previous version of Virgin Galactic’s VSS Unity fatally crashed after much anticipation surrounded the spacecraft.

WhiteKnightTwo, a carrier aircraft, released the VSS Unity into the atmosphere at a height of 45,600 feet where the spaceplane, along with its two pilots, reached an altitude of approximately 22 miles above the Earth’s surface and hit a top speed of Mach 1.9.

“It was great to see our beautiful spaceship back in the air and to share the moment with the talented team who are taking us, step by step, to space,” Virgin Galactic CEO Richard Branson said in a statement. “Seeing Unity soar upwards at supersonic speeds is inspiring and absolutely breathtaking. We are getting ever closer to realizing our goals.”

The first powered test flight can be seen below.