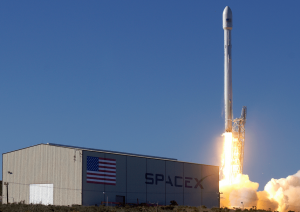 Reuters is reporting that the United States Air Force has certified SpaceX’s Falcon 9 rocket to launch military and spy satellites.

At the moment, most of the aforementioned launches take place through the the United Launch Alliance, a Boeing and Lockheed Martin coalition.

SpaceX will now compete for approximately one-third of the military and spy satellite launches, after spending two years and more than $60 million to acquire the certification from the US Air Force.

Once the company’s bigger rocket, the Falcon Heavy, is ready to roll, Elon Musk and SpaceX will able to launch even larger satellites.

Of course, however, it will have to undergo the same thorough testing and certification as the Falcon 9 before being given the green light.

For now, the SpaceX and United Launch Alliance rivalry is set to heat up, even though Elon Musk has one major leg up on the ULA…

His company builds its rocket engines from scratch in the United States, while the ULA generally depends on Russian-sourced engines for its rockets.

Congress will not allow the ULA to continue to get its rocket engines from Russia past 2019.