Boeing and Lockheed Martin, the two companies that actually make up the ULA will be tasked with building the rocket, called (drum roll please)… 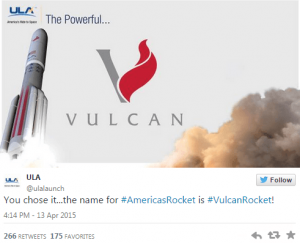 The contest only lasted a month or so, with Vulcan eventually ending up beating out other names voted on by the public such as Freedom, Eagle, Zeus, and GalaxyOne.

Vulcan will be the ULA’s very first proprietary rocket, representing yet another aircraft looking to get to low-earth orbit.