Uber Partners With the German Automaker Behind the Mercedes-Benz 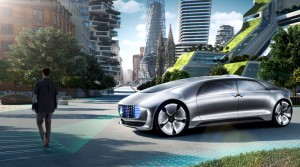 Uber announced it would be partnering with Daimler, the German automaker behind the Mercedes-Benz, for its next round of autonomous cars.

Not only does this mean the self-driving vehicles won’t be owned by Uber, it also represents the possibility that the first autonomous vehicle you hail from the taxi app will be a Mercedes.

“We can combine Uber’s global ridesharing network with the world-class vehicles of companies like Daimler, so that Uber riders can have a great experience getting around their cities,” Uber CEO Travis Kalanick wrote in a blog post Tuesday.

The move makes sense for Uber as the company aspires to run a massive network of self-driving car, but not be forced to build them itself.

“Auto manufacturers like Daimler are crucial to our strategy because Uber has no experience making cars—and in fact, making cars is really hard,” Kalanick penned.

He added, “By opening up the Uber platform to Daimler, we can get to the future faster than going it alone.”