The World’s First Solar Road Resides In a Small Village In Normandy, France 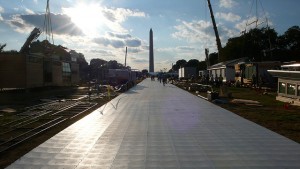 The small village of Tourouvre-au-Perche in Normandy, France is officially home to the world’s first solar road.

Spanning approximately 1km in length, the solar road was opened around one week ago by French Ecology Minister Ségolène Royal and is said to be capable of generating enough electricity to power the street lights.

While powering street lights may not seem like much for a $5.2 million, 32,000 square foot road of solar panels, it represents a major step forward for the viability of solar roads in general.

Silicon-based resin installed all over the road is expected to help it withstand rigorous use and the weight of big rigs.

Eventually, assuming the solar road is a success, Royal’s goal is to install additional solar panels across 1,000 kilometers of French highway.

At the moment, the one major drawback of solar roads is how expensive and less effective flat solar panels are when compared to angled panels typically used for solar roofs.

The company behind the world’s first solar road, Colas, hopes to reduce the cost of the panels going forward in an effort to carry out more than 100 other solar panel projects for much cheaper.