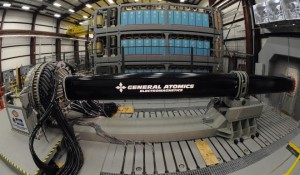 The U.S. Navy’s latest weapon is an electromagnetic railgun launcher…

Yes, it sounds intense but what does it actually do?

For starters, the launcher is capable of hurling 23-pound projectiles at speeds exceeding Mach 7 thanks to a form of electromagnetic energy called Lorentz force. To put it in perspective, that means shells can travel over 5,000 MPH!

The best part about the Navy’s new weapon?

The Navy’s chief engineer, Bryant Fuller, says “This capability will allow us to effectively counter a wide range of threats at a relatively low cost, while keeping our ships and sailors safer by removing the need to carry as many high-explosive weapons.”

The huge railgun launcher surprisingly only requires one person to operate it and has a range of 100 miles!

“[It] will give our adversaries a huge moment of pause to go: ‘Do I even want to go engage a naval ship? Because you are going to lose.”