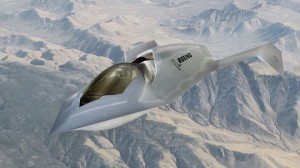 In 1992, the U.S. Air Force managed a project in conjunction with Boeing’s Phantom Works program encompassing the of an aircraft known as the Bird of Prey.

The Bird of Prey was relatively secret but is recognized as pioneering many of the new technologies we use in airplanes today.

Features of the single-seater Bird of Prey jet:

The Bird of Prey’s purpose was to test new technologies, including rumors of active camouflage for airplanes, yet after 38 test flights over Area 51, the jet was retired in April 1999 and declassified approximately 3 years later.

Today, Boeing says they are less secretive about the aircraft because many of the technologies developed using the Bird of Prey during the 90’s are now industry standards. However, mysteries still remain on some of the advancements Boeing is less forthcoming about.

Personally, I’d love to know if the rumor about active camouflage is true and how successful their tests were! Planes that change color and reflection based on their surroundings would be revolutionary in aerospace.