Tesla Will Build Model 3 Motors at its Massive Nevada Gigafactory 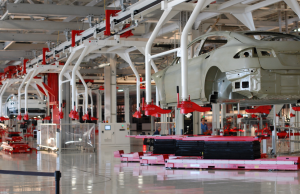 It appears more than just lithium-ion batteries will be produced in Tesla’s massive Nevada Gigafactory.

The recently announced that its Gigafactory will also be the site where Model 3 motors will be constructed, in addition to gearbox components.

Nevada Governor Brian Sandoval said during his State of the State speech that Tesla’s commitment to expanded production will bring in an extra $350 million in investment and 550 new jobs at the Gigafactory.

“We consider [the factory] to be a product. The factory itself is the machine that builds the machine,” Tesla CEO Elon Musk said last July. “It actually deserves more attention from creative problem solving engineers than the product that it makes.”

Currently, the Gigafactory is a third complete but it will eventually span 10 million square feet and house more than 1,000 full-time employees.