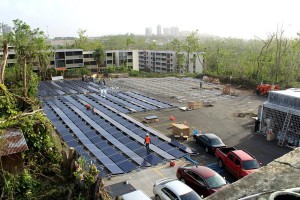 Puerto Rico is still suffering from the devastation that occurred as a result of Hurricane Maria.

Yesterday, Tesla tweeted out some of the progress the company has made utilizing its Powerwall batteries, a solar and power storage project taking place on top of a personal donation from Musk of $250,000.

Hospital del Niño is first of many solar+storage projects going live. Grateful to support the recovery of Puerto Rico with @ricardorossello pic.twitter.com/JfAu11UBYg

At the moment, the goal is to 95 percent of the company’s power back online by the end of December.