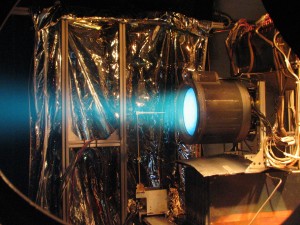 The European Space Agency is counting on the T6 ion thruster for a mission to Mercury.

At merely 11 inches in diameter, the T6 ion thruster will be one of four engines responsible for taking the ESA’s BepiColombo spacecraft to Mercury.

Designed by UK-based Qinetiq, the T6 ion thruster ionizes propellants in order to manufacture charged particles that can be accelerated further using an electric field.

“The down side is that the thrust levels are much lower and therefore the spacecraft acceleration is also low – meaning the thrusters have to be operating for long periods. However, in space there is nothing to slow us down, so over prolonged periods of thrusting the craft’s velocity is increased dramatically. Assuming the same mass of propellant, the T6 thrusters can accelerate BepiColombo to a speed 15 times greater than a conventional chemical thruster.”

The ESA’s Mercury mission is expected to last approximately 7 years in its entirety.