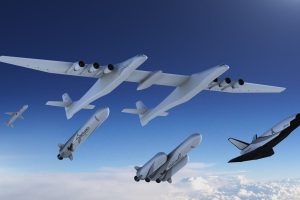 Stratolaunch, an aerospace venture created by Microsoft co-founder Paul Allen, has been working on a massive plane to launch rockets into orbit for some time now.

To what extent, the public had no idea. That is, until now…

Stratolaunch is reportedly developing an entire suite of rockets capable of being and carried and launched under its plane’s wings in an effort to have the first rocket ready to roll by 2022.

In a nutshell, Stratolaunch is working to develop a flying launchpad for, similar to that of Virgin Galactic and Virgin Orbit.

Stratolaunch, which originally planned to launch rockets for others, has pivoted to focus on its own rockets, the first of which will be capable of carrying about 7,500 pounds into orbit.

“We are excited to share for the first time some details about the development of our own, proprietary Stratolaunch launch vehicles, with which we will offer a flexible launch capability unlike any other,” Jean Floyd, CEO of Stratolaunch, said in a statement. “Whatever the payload, whatever the orbit, getting your satellite into space will soon be as easy as booking an airline flight.”