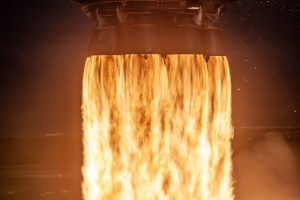 The Dragon II capsule that carried out a non-piloted test flight to the ISS in March has exploded during a later test on the ground, as confirmed by the SpaceX vice president, Hans Koenigsmann. The explosive event was already apparent from a video that leaked late last month, but the level of the vessel’s destruction was unknown until now. Koenigsmann stated that it’s too early to determine the exact cause of the incident, but provided a couple of crucial details that point to the thruster system.

More specifically, the “SuperDraco” unit, which is Dragon’s thruster was just being fired up when the anomaly occurred. This came only after the smaller thrusters were successfully activated and fired for five seconds each, and only after the preliminary powering tests had been concluded. As the particular capsule is meant to carry a human crew, and since SpaceX has invested a lot in the specific thruster unit and hypergolic liquid fuel, this is complicating the current schedule of development. The Dragon II capsule was planned to take its first crewed flight to the ISS in July 2019, and unless a really speedy and absolutely conclusive investigation takes place, this is not going to happen this summer.

Hopefully, the particular Dragon II vessel sustained damage from its sea landing and recovery operation after coming back from its low-orbit trip, so a brand new Dragon II wouldn’t have a problem carrying out the scheduled mission. In the worst case, this incident has to do with an undiscovered flaw in the design. This new capsule is incorporating some innovative novel elements in its design like the use of 3D printing for the combustion chamber, and the use of liquid-fueled launch abort system. That said, NASA and SpaceX may have a lot of investigation work to do and the fact that the Dragon II blew to pieces isn’t very helpful in that regards. Possibly, we may not see Dragon II carrying astronauts before 2020 after all.