On Earth snakes can be found almost everywhere. They live in trees, they swim in rivers and oceans and have been found in the worlds harshest deserts. But now researchers at the SINTEF Research Institute of Norway are hoping that snakes will one day reach Mars. But not the snakes we commonly think about, instead of reptiles SINTEF wants to send robotic snakes! 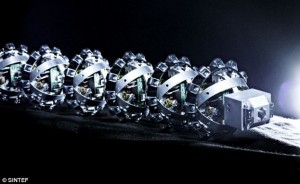 The belief is a robotic snake could travel places that the Curiosity rover couldn’t. Aksel Transeth of SINTEF says, “Biological snakes can climb rocks and slide through small holes.” He goes on to state, “The snake robot could travel to cliffs and look underneath overhangs. It could find a crevasse, crawl down it and extract a sample, which itself could tell us how Mars evolved as a planet.”

However currently snake robots face many mobile challenges on Earth and those issues will only be greater on Mars because the robots would be facing colder temperatures and less gravity then on Earth. While this is all speculation at this point SINTEF says it could have a prototype robot built within months and have high hopes that snake robots could reach Mars as soon as 2020.