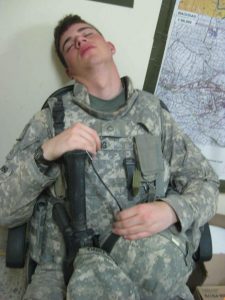 Due to our hectic schedules, stress, and a myriad of life responsibilities, most of us suffer from nights without sleep. However, a military secret to help insomniacs fall asleep in just 120 seconds has been revealed.

A book titled “Relax and Win: Championship Performance” features this secret method that is said to have a 96 percent success rate after six weeks of practice.

The book reads, “The U.S. Navy Pre-Flight School developed a scientific method to fall asleep day or night, in any conditions, in under two minutes. After six weeks of practice, 96 percent of pilots were able to sleep in two minutes or less even after drinking coffee, with machine gunfire being played in the background.”

Following are the steps to fall asleep in just two minutes:

After this, you should try to clear your mind by visualizing one of the three following images: