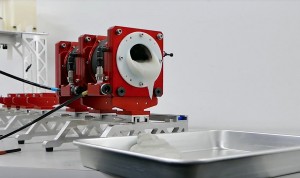 Manufacturing rocket fuel can be quite dangerous as it involves the mixing of a bunch of potentially volatile materials.

In an effort to make the process a bit safer, engineers from Chuo University and Japan’s national aerospace agency (JAXA) have developed what is being described as a ‘puking robot’ to safely mix solid rocket fuel.

Utilizing a process known as peristalsis, the prototype robot essentially works like our intestines and esophagus in order to manufacture fuel in one slow, continuous process.

Ultimately, the robot spits out the final product which then dries into a solid, a method the researchers hopes proves to be a much better all-around process.