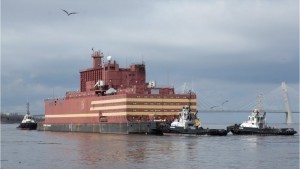 Known as Akademik Lomonosov, this floating nuclear reactor is moving toward Western Europe for a controversial maiden voyage.

The plant will be towed through the Baltic Sea to a base in Murmansk, a port town in northwest Russia. After arriving at the base the reactor will be loaded up with fuel. However, the final destination for the floating power plant is Pevek, a port town located above the Arctic Circle. (Pevek has the distinction of being known as the northernmost town in Russia.) The plant is planned to begin generating power by the summer of 2019.

According to Rosatom Corporation, the company responsible for building Akademik Lomonosov, this plant will replace the Bilibino and Chaunskaya thermal power plants, which are currently providing power to Pevek.

The project has come under widespread criticism

Rosatom says that their floating nuclear power plant will be “invincible” — able to survive tsunamis and other natural disasters. The company adds, “In addition, the nuclear processes at the floating power unit meet all requirements of the International Atomic Energy Agency (IAEA) and do not pose any threat to the environment.”

This project is worrying the countries along its planned route, as well as the Greenpeace organization. Critics have dubbed this project “floating Chernobyl” and “nuclear Titanic.”

Jan Haverkamp, a nuclear expert for Greenpeace Central and Eastern Europe, said, “Nuclear reactors bobbing around the Arctic Ocean will pose a shockingly obvious threat to a fragile environment which is already under enormous pressure from climate change.”