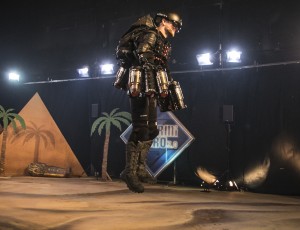 Richard Browning, who is the founder and chief test pilot of Gravity Industries for its body-controlled jet engine power suit, has set a new world record.

The British Inventor and entrepreneur hit a speed of 32.02mph (51.53 km/h) on his third and final attempt over a lake in Reading, England, good for the fastest speed ever in a jet engine suit.

Afterwards, Browning said, “It is a very special moment every time we suit up, it’s about 45 kilos, you really know you’re about to do something as the engines starts pulling up, it starts to build, you can sense the energy and the moment the ground leaves your feet and you’re actually in the air it’s a pleasure to joy.”