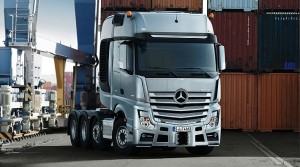 The US Department of Transportation and the National Highway Traffic Safety Administration is looking to require all newly manufactured heavy-duty vehicles weighing more than 26,000 pounds to include speed-limiting devices.

The idea was proposed this past Friday, and if approved, would encompass buses, big rigs, dump trucks, refuse haulers, and other larger work trucks.

By requiring heavy-duty vehicles to include speed-limiting devices that don’t allow them to exceed speeds of 60 to 68 miles per hour, the feds hope to ultimately minimize traffic deaths in the United States.

“In addition to saving lives, the projected fuel and emissions savings make this proposal a win for safety, energy conservation, and our environment,” DOT secretary Anthony Foxx said in a statement.

In fact, data shows that speed is the main culprit in approximately a quarter of all truck accidents.

The good news is that the trucking industry recognizes there is a problem and actually supports the proposal.

Sean McNally, spokesman for the American Trucking Associations (ATA), told Trucks.com, “We know the cliché ‘speed kills’ is true when it comes to driving. Speed is a factor in a third of all vehicle crashes and 23 percent of all truck crashes, so slowing our vehicles down can have tremendous safety benefits.”