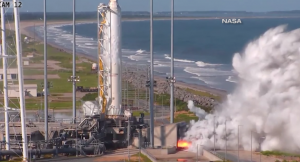 Two years ago, Orbital ATK’s Antares rocket exploded merely six seconds after it launched, with 5,000 pounds of supplies for the International Space Station on board.

Engineers have been hard at work ever since the mishap, in an effort redesign the Antares rocket engine researchers blamed for the failure.

Yesterday, the Antares rocket’s new engine successfully fired up at full power in a “hot fire” test, a major step towards the rocket meeting its goal of once again attempting to head up to the ISS in July.

Technically, engineers still have to inspect the redesigned engine of the Antares rocket before claiming the test was a complete success, but it certainly looks like the rocket will be back in business sooner rather than later.