Technology That Monitors the Wiring in Building and Ships 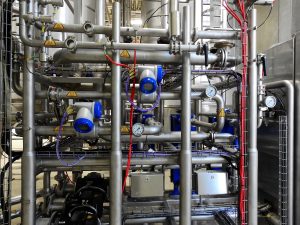 Have you ever had a shocking experience (pardon the pun) when you received your energy bill? Weep no more. Thanks to the latest NILM (non-intrusive load monitoring) technology, expensive energy and repair bills will soon be something of the past by monitoring the state of electrical appliances.

Often referred to as a “recording” of an appliance “singing”, NILM can “learn” and record the different “tunes” each appliance generates when switched on.

By predetermining the current / resonance / fluctuations / voltage e.g. a kettle draws compared to a stove, a clamp on the phase wire “looks” for these characteristics in an electrical cable. With the assistance of a standalone PC and GUI (graphical user interface), a 70% accuracy can be achieved to identify and monitor electrical appliances in ships or buildings.

MIT professor of electrical engineering Steven Leeb and seven others at MIT, the U.S. Coast Guard, and the U.S. Naval Academy recently tested the NILM on the Coast Guard cutter, USCGC Spencer, based in Boston.

The test resulted in the detecting of anomalous amount of power being drawn by a component of the ship’s main diesel engines called a jacket water heater. At closer inspection, severe corrosion and broken insulation was found on the heaters.

“The NILM also detected a serious shock hazard and may have prevented a class Charlie (electrical) fire in our engine room.” Leeb said.

Leeb pointed out that the NILM can have multiple applications with early detection, energy savings and maintenance procedures as only a few currently being utilized.

Leeb says, “the system can be physically and electronically isolated and thus highly resistant to any outside tampering or data theft”.

We can expect the NILM technology to become part of our every day experience, just another advancement operating silently in the background ensuring costs savings and the safekeeping of our hard-earned possessions.