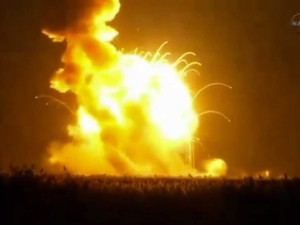 Yesterday, NASA’s unmanned Antares rocket was set to take 5,000 pounds of cargo to the International Space Station but unfortunately exploded merely seconds after its launch in Virginia.

The company behind the Antares rocket, Orbital Sciences, said in a statement that the explosion was due to a “vehicle anomaly”. NASA spokesman Jay Bolden told CNN, “There was failure on launch. There was no indicated loss of life,” but he did mention there was “significant property and vehicle damage.”

Mr. Frank Culbertson, Orbital’s Executive Vice President and General Manager of its Advanced Programs Group said, “It is far too early to know the details of what happened. As we begin to gather information, our primary concern lies with the ongoing safety and security of those involved in our response and recovery operations. We will conduct a thorough investigation immediately to determine the cause of this failure and what steps can be taken to avoid a repeat of this incident. As soon as we understand the cause we will begin the necessary work to return to flight to support our customers and the nation’s space program.”

Check out NASA’s blog for a full list of the cargo on board the Antares rocket.