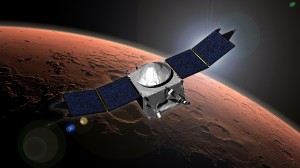 MAVEN project manager David Mitchell said, “You get one shot with orbital insertion, and MAVEN nailed it.”

MAVEN is the first Mars explorer to prioritize researching Mars’ upper atmosphere in order to determine how the planet managed to lose its atmosphere and surface water over time.

NASA has announced the spacecraft will begin testing its instruments over the next few months before taking “measurements of the composition, structure and escape of gases in Mars’ upper atmosphere.”

Currently, MAVEN is studying passing comets and their effects. “We’re excited to complete our observations of how the comet affects Mars, and we’re eager to get to our primary science phase,” said MAVEN Principal Investigator Bruce Jakosky of the University of Colorado, Boulder.