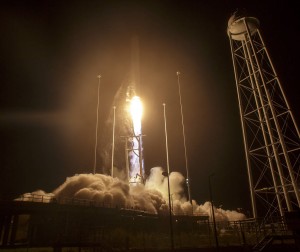 NASA announced around 8:00 p.m. last night that the Orbital ATK’s Antares rocket and Cygnus cargo spacecraft had entered space after launching from its Wallops Flight Facility.

According to NASA’s blog post “Cygnus is scheduled for arrival at the International Space Station on Oct. 23, with about 5,100 pounds of supplies and payloads, including critical materials to directly support dozens of the more than 250 science and research investigations that will occur during the space station’s Expeditions 49 and 50.”

Previously, the Antares rocket exploded at Wallops on the launch pad on October 28, 2014, so it appears the second time is the charm in this situation.