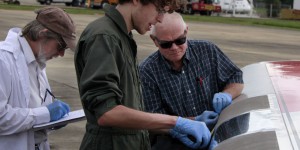 NASA is looking to save airlines millions of dollars by developing a series of new technologies, with the latest being a bug-repellant coating.

NASA researchers have determined that bugs splattered on a commercial jet can can decrease fuel efficiency by as much as six percent, essentially disturbing the airflow over the surface.

In order to conquer the messy situation, NASA is testing a new bug-repellant coating technology that utilizes non-stick materials resulting in bugs sliding right off of a plane.

Boeing’s specially designed 757 ecoDemonstrator is in charge of testing NASA’s six different coatings at the moment, in order to determine which coating performs best.