Lyft Acquires the Largest Bike-Sharing Company in the United States 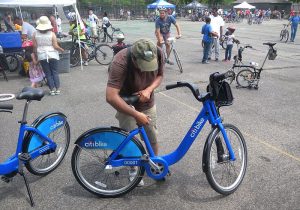 By Jim.henderson [CC0], from Wikimedia Commons

In fact, Motivate is currently the largest bike-sharing company in the states, reportedly responsible for nearly 80 percent of bike-share trips in the country.

Lyft says it “will invest to establish bike offerings in our major markets and pursue growth and innovation in the markets where Motivate currently operates.” The company added, “Together Lyft and Motivate will revolutionize urban transportation and put bike-share systems across the country on a path toward growth and innovation.”

The deal is rumored to be around $250 million, with Lyft taking on Motivate’s city contracts.