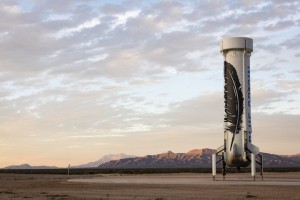 We hear so much about Elon Musk and SpaceX that it’s easy to forget about Jeff Bezos and Blue Origin.

However, Bezos turned heads recently by telling The Washington Post that Blue Origin has interest in the moon.

Bezos has asked NASA to back an “Amazon-like shipment service for the moon that would deliver gear for experiments, cargo and habitats by mid-2020, helping to enable future human settlement of the moon.”

Lunar missions seem to be all the rage these days as SpaceX recently announced plans to go to the moon in the form of a fly-around.

Bezos believes Blue Origin’s Blue Moon spacecraft will be able to carry up to 10,000 pounds of cargo to the moon and it happens to be compatible with a large variety of launch vehicles.

The moon’s Shakleton Crater would be the preferred landing spot because of its plentiful sun exposure and water ice.

Blue Origin believes its Blue Moon is useful for “cost-effective delivery of mass to the surface of the moon. Any credible first lunar settlement will require that capability.”