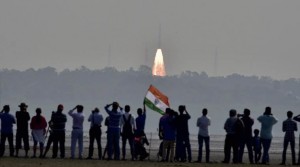 This past Wednesday, India absolutely obliterated all previous records for launching satellites into space at one time.

Russia was the previous record holder after sending 37 satellites into orbit at once back in 2014.

However, the Indian Space Research Organization is much more interested in boosting its space program than setting records, with goals to eventually travel to Jupiter and Venus.

The ISRO is also being extremely cost-efficient in its endeavors, this time collaborating with six other countries for its onboard payload.

The Guardian details how the cargo was divided up on the four-stage Polar Satellite Launch Vehicle:

On board was a 714kg satellite for earth observation and more than 100 smaller satellites weighing less than 10kg each. Three were Indian-owned, 96 were from US companies, and the rest belonged to companies based in Israel, Kazakhstan, the Netherlands, Switzerland and the United Arab Emirates.

Most were owned by Planet Labs Inc, a US-based Earth-imaging company.

Watch it all unfold here: