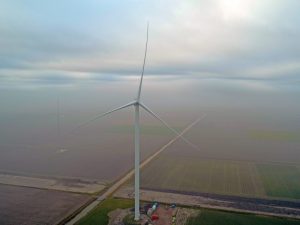 Bigger is almost always better in the wind industry which means bigger turbines and turbine blades.

But one of the big problems that is holding back wind energy is the size of turbine blades. Turbine blades are transported by road and moving long turbine blades is a logistical nightmare which imposes a limit on how big the blades can get. Currently, the largest blades in operation are nearly 300 feet (88.4 meters) long.

Recently, General Electric switched on its experimental next-generation wind turbine – Cypress. Located north of Amsterdam, the sheer size of Cypress is something to behold.

Cypress turbine blades are made in two separate pieces for easy transportation and assembly at site. Power producers can maximize power generation with Cypress while minimizing the number of turbines

Just one of the Cypress can generate 5.3 megawatts of electricity, enough electricity to power the equivalent of 5,000 European homes.