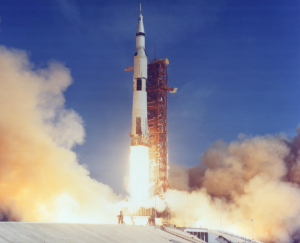 A former NASA intern sparked a bit of an internet frenzy this week by uploading the Apollo 11 Guidance Computer code to Github.

While the system responsible for the first moon landing has apparently been available for researchers for a while now, it’s never quite been part of the public domain.

Obviously, internet dwellers have been dissecting the MIT-designed system for a few days now, and as one would probably guess, they have discovered some hidden gems within the code.

Some of the more interesting excerpts:

# THE FOLLOWING QUOTATION IS PROVIDED THROUGH THE COURTESY OF THE AUTHORS.

# USUALLY TALK OF A NOUN AND A VERB, AND SUCH ABOMINABLE WORDS AS NO

# CHRISTIAN EAR CAN ENDURE TO HEAR.”