Ford’s Foldable Robot Could Soon Be Delivering Your Packages 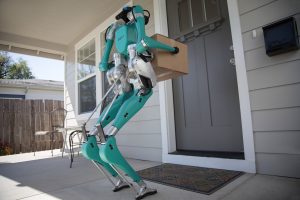 With so many robots available on the market, why would Ford show interest in a walking delivery robot? It’s all about autonomous vehicles and the need for the automated delivery of goods to your doorstep.

Ford partnered with the Oregon-based startup company called Agility Robotics saw an opportunity to solve delivery issues for the US postal service and Domino’s Pizza. The US postal services delivery firm Postmates alone delivered more than 6 billion packages in 2018. Ford announced on Tuesday, May 21 that it was testing a robot to carry deliveries from its autonomous vehicles to your front door.

Digit, as it is named, will be Ford and his partner Agility solution to the “last mile delivery” obstacle. Digit is designed to unfold from the back of an autonomous delivery van and is a two-legged humanoid that can handle lightweight shipments of up to 40 pounds.

“As we’ve learned in our pilot programs, it’s not always convenient for people to leave their homes for packages or for businesses to run their own delivery services,” Ken Washington, Ford’s chief technology officer, said.

“If we can free people up to focus less on the logistics of making deliveries, they can turn their time and efforts to things that really need their attention.”

When an autonomous vehicle brings Digit to its destination, Digit, which is equipped with lidar and several stereo cameras to detect its surroundings can send an image back to the vehicle which then configures a solution when the robot encounters an unexpected obstacle. The vehicle is also equipped to request information if it has difficulty processing the information and can relay it to the cloud and request help from other systems.

Digit may not be the fastest robot on the market and may be years from visiting your neighborhood, but a walking robot is part of Ford’s vision for how its autonomous vehicles will someday deliver packages and goods in the future.