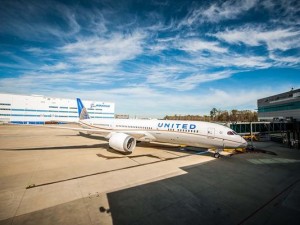 The aircraft is also unique because it is the 250th Dreamliner overall that Beoing has delivered since the aircraft’s debut.

“Our customers have told us they love flying on the Dreamliner, and we’re excited to mark yet another first for the aircraft with this delivery from Boeing South Carolina,” Ron Baur, United’s VP of Fleet, said in Boeing’s statement.

“We were the first North American carrier to fly the 787-8 in September 2012 and the first to fly 787-9s in September 2014,” Baur added. “The Dreamliners have allowed us to fly longer distances with greater fuel efficiency and open new direct routes such as Los Angeles to Melbourne, while providing our customers and employees with a more comfortable flying experience.”