Engineers Fly The First-Ever Aircraft With No Moving Parts 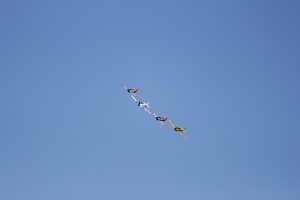 Airplanes today are one of the most well-engineered things, and they need to be if we want them to be safe. That said, they have too many moving parts, like turbine blades and propellers, that only add to the complexity and therefore, make them less reliable. Thankfully, there is a new advancement in this field – airplanes with no moving parts that use ionic wind as propulsion.

The concept plane was built by MIT engineers with Steven Barrett, associate professor of aeronautics and astronautics, at the helm of the team. “This is the first-ever sustained flight of a plane with no moving parts in the propulsion system,” says Barrett, adding that his inspiration for this aircraft comes from “Star Trek”, his favorite movie and TV series.

Even the design of the aircraft was under the influence of the ionic propulsion system in “Star Trek”, or as Barrett puts it “in the long-term future, planes shouldn’t have propellers and turbines, they should be more like the shuttles in ‘Star Trek,’ that have just a blue glow and silently glide.”

The “ionic wind” that this concept aircraft uses is known in physics as electro-aerodynamic thrust and it is created when a current passes between a thick and thin electrode, or in this case thick and thin wires that run across. Right now, even at 40,000 volts, this thrust is only capable of lifting a small aircraft. More precisely, the concept airplane has a 5-meter wingspan and weighs only 5 pounds, near to that of camera drones. For electricity, the team uses lithium-polymer batteries, which are the go-to choice for electric vehicles nowadays.

Compared to any other propulsion systems, “ionic wind” should be much more reliable, but also almost silent. This may make a big difference to passengers in the plane, but also to other flying objects, like drones for example. Right now, if you record video with sound with a drone, the only thing you’ll hear will be the sound of the propellers.

The ionic aircraft is only a proof of concept right now – it flew only 60 meters in a test flight across the gymnasium in duPont Athletic Center. However, it repeated the same feat 10 times without any issue, which encouraged the MIT engineers to continue to improve the design and increase the efficiency of the aircraft.