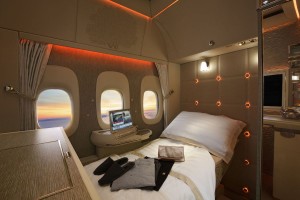 Ever wondered how the world’s super-rich fly?

If Emirates’s new first class suites on its 777 are any indication, it might be even better than you could imagine.

Why’s that you ask?

These @Emirates virtual windows are INSANE. Look how sharp this is! Holy friggin crap. pic.twitter.com/0U6hDcBtit

The first class suites feature a number of bells and whistles, most notably “zero-gravity” seats, virtual windows, and active noise cancelling E1 headphones from Bowers and Wilkins. Of course, mood lighting and an HD TV with thousands of channels are a given.

Not to mention, the suites themselves are fully enclosed with a ton of room at 40 square feet.

Here it is! The brand-new @Emirates 777, and my suite, 1E. This video tour’s for Patrick, an 8-year-old #AvGeek who’s obsessed with this plane. Hi Patrick! Hope you get to fly in 1E sometime soon! pic.twitter.com/aj1opnZDup

The zero-gravity seats were inspired by NASA and do their best to ensure optimal passenger comfort, alleviating potential aches and pains which accompany regular seats.

With a total of six suites on the Emirate’s Boeing 777, the company’s creation appears to be living up to its “hotel in the sky” billing.