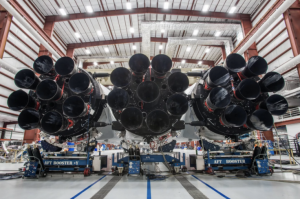 The Falcon Heavy Rocket, which currently has a tentative launch date of sometime in January, has been somewhat of a mystery until recently.

Elon Musk tweeted out images of a nearly fully-assembled Falcon Heavy Rocket in Cape Canaveral, Florida, the best look we’ve got of the rocket up to this point.

The Falcon Heavy is comprised of three Falcon 9 cores essentially strapped together, which will return to Earth after they are launched in order to be reused.

Drawing conclusions from the pictures would indicate that the payload and nose cone are still absent, however once completed, will be part of the most powerful rocket ever made.

Musk doesn’t seem to think the Falcon Heavy will be successful immediately saying the following:

“I hope it makes it far enough away from the pad that it does not cause pad damage,” said Musk in July. “I would consider even that a win, to be honest.”

Falcon Heavy at the Cape pic.twitter.com/hizfDVsU7X