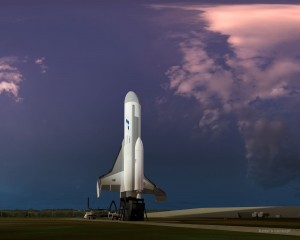 The XS-1 is a vehicle Boeing has been developing which will make launching satellites a much more efficient endeavor.

Now, Boeing has announced that it is working DARPA in order to further advance the XS-1 in order to eventually make its DARPA’s next generation hypersonic space plane.

Essentially, this means DARPA like the concept pitch from Boeing and is now asking them to build the real thing which will be tested countless times over the next
few years>

“The XS-1 would be neither a traditional airplane nor a conventional launch vehicle but rather a combination of the two,” DARPA’s Jess Sponable explained in a press release. “With the goal of lowering launch costs by a factor of ten and replacing today’s frustratingly long wait time with launch on demand.”

Ground testing is still a ways off, with 2019 being the earliest it could take place, which means the space plane itself will not come to fruition for quite a while.

Still, the XS-1 represents the intriguing ability to eventually be able to fly to suborbital heights without boosters before deploying a disposable, secondary rocket to shoot its payload into orbit.

Even more impressive is the spaceplane’s ability to perform the same task with a second satellite up within hours of launching the first.