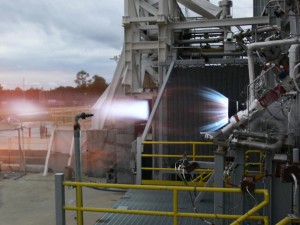 Blue Origin has released a new video showing off its next-generation rocket engine igniting, and it looks pretty dang sweet.

The BE-4 being tested, has been in development for around 7 years and has largely remained a mystery up until now, ever since Blue Origin has been publishing more and more updates in regards to its progress.

Latest BE-4 engine test footage where we exceeded our Isp targets. We continue to exercise the deep throttling of our full scale 550,000 lbf BE-4, the reusability of our hydrostatic pump bearings and our stable start/stop cycles. More to follow from ongoing tests. #BE4 #NewGlenn pic.twitter.com/fw5zvtwpJ6

As you can see in the video above, the rocket engine’s blue-and-yellow flames are oddly mesmerizing, and shows off the BE-4’s ability to throttle, AKA a way to control how much an engine thrusts at a given time.

At the moment, the United Launch Alliance hopes to fly the BE-4 on its Vulcan as early as 2019.

Blue Origin on the other hand aims to fly a BE-4-powered New Glenn before the end of the decade.