Paying $57 per share comes out to $2.6 billion, however the the deal’s aggregate value is closer to $4 billion.

Obviously, this is a huge win for Alaska Air as the airline has now become the fifth-largest airline in the United States.

Alaska Air noted in a press release, that obtaining a stronger foothold in the California market represents a clear “platform for growth.”

At the moment, Alaska Air plans to “spend a couple of years” figuring out how to best utilize Virgin America’s brand, which is already widely popular in Silicon Valley.

Below you can see how the merger will expand the airline’s route network. 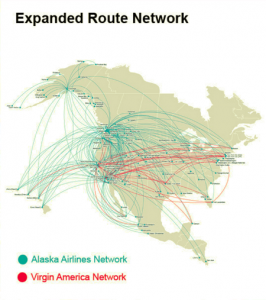