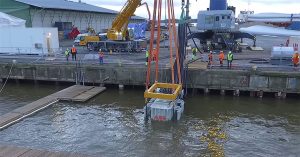 As the need for more natural resources increase daily, offshore oil and gas-drilling technology is migrating from floating platforms to the seafloor.

This will not only increase the production, but remove current hazards caused by icebergs and hurricanes. Pumps, compressors and separators moved down to the seafloor decades ago, requires electricity. Presently an impractical web of power cables know as umbilical’s are supplying seabed equipment from power plants or diesel generators aboard nearby oil rigs.

Engineers are looking at future expansions and production of natural resources by building subsea factories that extract and process oil and natural gas directly on the seafloor. And in the center of this visionary idea, electricity takes center stage.

This is where ABB and Siemens are leading the pack with the world’s first subsea power-distribution stations. Siemens has successfully concluded the first phase of its Subsea Power Grid shallow water test in Trondheim, Norway. ABB will complete its final round of testing in June and expects to install its first subsea power system in 2020.

“Our technology is an enabling technology for the subsea factory,” says Bjørn Rasch, head of subsea power for Siemens.

How Will It Work?

ABB has developed a subsea power-distribution system (red) that can be placed up to600 kilometers away from an onshore power plant. The company expects to install it at a commercial site in 2020.

The subsea models consist of a transformer, a medium-voltage switchgear, and a variable-speed drive.

The subsea electricity distribution will be connected through a single line to the surface where electricity will be provided to the subsea distribution point by either water or tidal generators, wind turbine or platform power plants. Both projects have been in the works for more than five years.

Siemens announced that they can deliver 30 kilovolts, while its variable-speed drive puts out 6.6 kV. Equipment with power rating between 1 and 15 megawatts can be connected to their power grid. In addition, remote management will be controlled via fiber-optic cable so engineers and technicians can access operations remotely.

Humans have always been driven by the lure of the unknown. Subsea power distribution is only the start. Imagine cities and factories producing goods, food and accommodation in the not too far future. It is said that humans have managed to explore only about 5% of the ocean floor. The remaining 95% of the ocean remains a mystery.