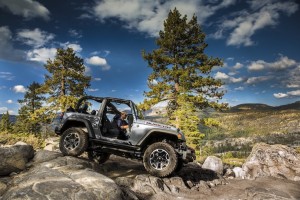 FCA chief Sergio Marchionne has confirmed that the 2017 Jeep Wrangler will not follow the lead of Ford’s new F-150 and have an all-aluminum body, despite months of reports declaring otherwise.

Instead, the next-generation Wrangler will feature a predominantly steel body, only utilizing aluminum for the hood, doors, and fenders in an effort to keep the vehicle’s weight down.

Big time Jeep off-road enthusiasts can now sleep comfortably knowing the performance of the 2017 Wrangler will not be compromised by experimenting with an all-aluminum body.

Marchionne, speaking to reporters after receiving an SAE foundation award, said, “There will be a large portion of that vehicle that will be aluminum. It will not be all aluminum.” He later added that “Because of the difference in cost—not just of the material but the actual assembly process—I think we can do almost as well without doing it all-aluminum. I think we can get very close.”

While Ford has experienced success with aluminum and improving fuel efficient, perhaps Jeep is making the right call by deciding not to chance alienating its core fan base.