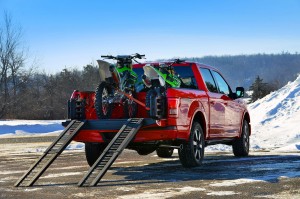 Ford made headlines when the company initially announced the 2015 Ford F-150 would feature an aluminum body, versus the steel frame many drivers of the popular vehicle were familiar with.

The change was a move designed to improve fuel efficiency by lowering the weight of the truck, a trend many carmakers are following these days.

However, with Ford being a trailblazer of sorts when it comes to aluminum, many worried the change to aluminum over steel would greatly increase repair costs.

According to Auto News, smart design tactics have held insurance rates steady, at least for the time being.

While yes, aluminum is more expensive to repair than steel, Ford’s designers took this into account when developing the new F-150.

For example, repairs for the new aluminum F-150 will take place on a smaller scale, thanks to smaller, cheaper panels being used on the truck’s body.

Insurers won’t adjust rates until they’ve gathered enough data to identify trends, and that could take upward of a year if not longer.

So for now, 2015 F-150 owners can breathe a sigh of relief, but whether or not insurance rates stay in check remains to be seen.